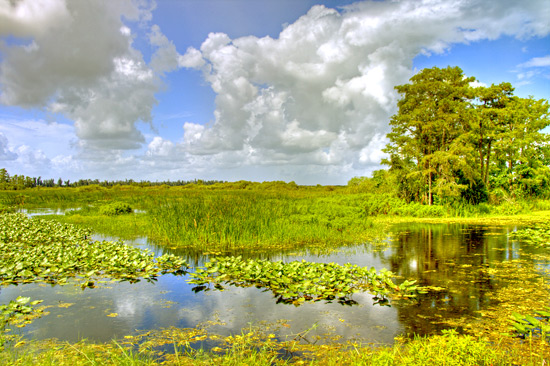 Ecoregions are where ecosystems recur in predictable patterns.

Ecoregions are geographic areas with generally similar ecosystems and similar types, qualities, and quantities of environmental resources. Ecoregion boundaries are determined by examining patterns of vegetation, animal life, geology, soils, water quality, climate, and human land use, as well as other living and non-living ecosystem components. Ecoregions are where ecosystems recur in predictable patterns.

As a system of land classification, the ecoregion concept offers scientists, ecologists, biologists, and others a valuable tool for research, assessment, monitoring, and management of ecosystems and ecosystem components. Most importantly, ecoregions provide for a more holistic approach to resource management. For example, instead of managing for individual animal and plant species, the ecoregion approach is to manage an entire ecosystem.

National governmental agencies, state/provincial agencies, and nongovernmental organizations (NGOs) use the ecoregion concept to estimate ecosystem productivity, to determine probable responses to land management practices and other ecosystem disturbances, and to address environmental issues such as air pollution, forest disease, or threats to biodiversity over large areas.

In the United States, many federal agencies and private organizations use systems of land classification based on the ecoregion concept. Some of these include USDA Forest Service, U.S. Geological Survey, U.S. Fish and Wildlife Service, U.S. Environmental Protection Agency, The Nature Conservancy, National Association of State Foresters, Renewable Natural Resources Foundation, American Institute of Biological Sciences, The Wilderness Society and The Sierra Club. Projects include biodiversity analysis, landscape and regional level forest planning, and the study of mechanisms of forest disease.

Robert G. Bailey is a noted geographer and mapmaker with a long career at the U.S. Department of Agriculture’s Forest Service. Starting in the late 1960s Dr. Bailey started to develop and refine a system of land classification that took into account not just climate and vegetation, but also animal life, geology, soils, water quality, and human land use. Bailey’s "ecoregions" concept has had a major influence on the adoption of an ecosystem-based approach to managing public land, especially forests.

Bailey’s research and ecoregion land classification system is based on three principals:

According to. Bailey, "There is a unity and orderliness in nature. There's a rhyme and reason out there that's discernible and amenable to analysis. A case in point is that all steep slopes have shallow soils. Recognition of this orderliness and unity is a basic tenet of ecogeography."

Dr. Bailey’s ecoregion concept presents a holistic view of nature. Importantly, he sees a need for evolutionary change in educational institutions to reduce compartmentalization of academic disciplines. In the U.S. Forest Service, the corresponding problem is separation of functions.

"We have a staff set up for wildlife and fisheries, a staff for timber, a staff for recreation, each with its own budget," Bailey explains. "There has been no common unifying framework to bring the functions together."

In early June of 1992 the USDA U.S. Forest Service adopted a policy of ecosystem management that applied to national forests, grasslands, and research programs. By July, an Ecological Classification and Mapping Task Team (ECOMAP) was formed in the Washington, D.C. office to develop a consistent approach to ecosystem classification and mapping at multiple geographic scales. This was identified by the chief of the Forest Service as a critical first step in providing field units with an essential tool and scientific basis to plan for and implement ecosystem management. Soon afterwards a subgroup of ECOMAP was formed with representatives from all Forest Service Regions, two Research Stations, the USDA Natural Resources Conservation Service and The Nature Conservancy. The group met in September in Lincoln, Nebraska, to begin development of a land classification system. The structure of the National Hierarchical Framework of Ecological Units (see below) was formulated at this meeting and was adopted by the Forest Service on November 5, 1993.

Briefly, as described by ECOMAP (1993), the framework:

"... is a regionalization, classification, and mapping system for stratifying the Earth into progressively smaller areas of increasingly uniform ecological potentials. Ecological types are classified and ecological units are mapped based on associations of those biotic and environmental factors that directly affect or indirectly express energy, moisture, and nutrient gradients which regulate the structure and function of ecosystems. These factors include climate, physiography, water, soils, air, hydrology, and potential natural communities."

In November 1992, the subgroup began the process of producing a national map of ecological units at the section level of the subregion planning and analysis scale. (See below.) During the process of delineating Sections, ecoregion boundaries were revised. The map "Ecoregions and Subregions of the United States" was compiled by December 1993 and printed in June 1994 (Bailey and Others 1994). The Section map unit descriptions were produced after the map was compiled. A new, revised ecoregion map was also printed in June 1994. Bailey’s publication (Bailey 1980), which describes the Domains, Divisions, and Provinces of the United States is being revised (Bailey, in prep.).

In summary, the National Hierarchical Framework provides a scientific basis for regionalization of ecosystems into successively smaller, more homogeneous units. At the Section level, these units allow managers, planners, and scientists in the Forest Service, and in cooperation with other agencies, to study management problems on a multiforest and statewide basis; organize data collected during broad-scale resource inventories; and interpret these data among regions.

The structure of the framework is shown in the following tabulation:

The appropriate tier to utilize for a task depends on the nature and scope of the issues under consideration, ranging from national to local in extent. The largest classified land units, ecoregions, are appropriate for national-scale applications and are subdivided into three successively smaller ecological units: domains, divisions, and provinces.

There are four domains used for worldwide ecoregion classification, and all four appear in the United States: the Polar Domain, the Humid Temperate Domain, the Dry Domain, and the Humid Tropical Domain.Domains are broad climatic zones or groups of related climates that are differentiated based on precipitation and temperature. Domains have broad applicability for modeling and sampling, strategic planning and assessment, and international planning.

Domain Coding and Naming: Domains have been assigned three-digit numbers in multiples of 100, as follows:

Divisions represent regional climatic types within domains and are differentiated based on precipitation levels and patterns, temperature, and vegetational affinities.The four Domains are divided into 25 Divisions, of which 11 are identified as Mountain Provinces.

Division Coding and Naming: Divisions within Domains are assigned numbers in multiples of 10, and Mountain Divisions are identified with a capital letter "M" prefix. The example below illustrates the Division coding and naming conventions for the "200 Humid Temperate Domain:"

Provinces are differentiated based on dominant potential natural vegetation types and land covers. Mountainous areas that exhibit different ecological zones based on elevation are identified at this level.The 25 Divisions are divided into 52 Provinces.

Province Coding and Naming: Provinces within Domains and Divisions are assigned single digit numbers. The example below illustrates the Province coding and naming conventions for the "220 Hot Continental Division."

Sections are smaller land areas of relatively homogeneous physical and biological components that interact to form environments of similar productive capabilities, response to disturbances, and potentials for resource management. Sections are subdivisions of Provinces based on terrain features.The 52 Provinces are further divided into 164 Sections.