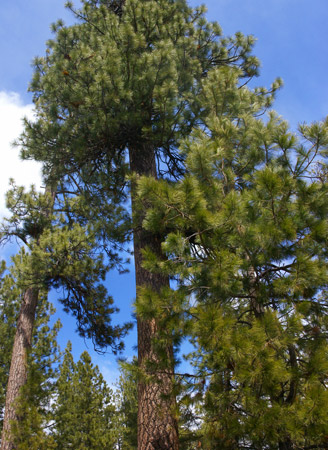 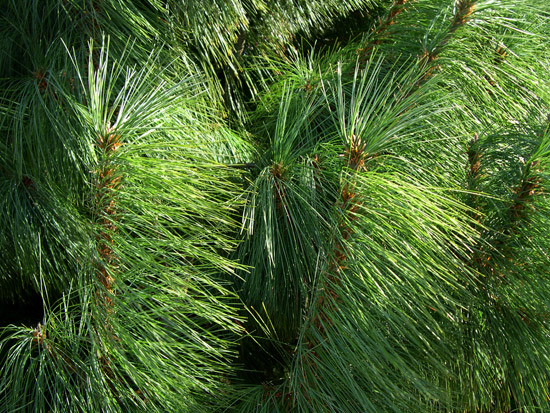 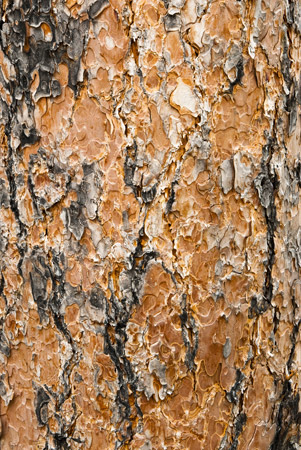 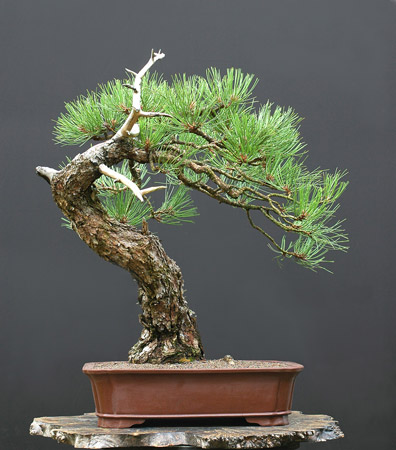 Ponderosa pine is widespread through western North America, where the tree forms expansive forests. Ponderosa pine tolerates a range of habitats in the west, but it is not well suited for cultivation in the eastern United States. It was designated as Montana's state tree in 1949, after it was chosen by schoolchildren in Helena. It is Montana's chief lumber tree.

This is a tall, straight-trunked tree with a pyramidal, open crown. Its bark is black on young trees, later becoming cinnamon colored and emitting a faint odor of vanilla. The stiff but flexible needles are 5–10 inches long in groups of two to three. Cones are 3–6 in long with a prickle on each scale.

Relative to other pines, this tree grows moderately to rapidly. It is long-lived; trees often reach ages of 300 to 600 years.

The climate in this tree's range is characterized by a short growing season and minimal summer precipitation. Being drought tolerant, ponderosa pine usually occupies the transition zone between grassland and forest. At lower elevations, it shares its habitat with grasses and shrubs. At higher elevations, Pacific ponderosa pine grows with trees that are more shade tolerant and moisture demanding, such as Douglas-fir, grand fir, and white fir.

Importance to Livestock and Wildlife

At each stage of its life, ponderosa pine provides numerous species of birds and mammals with shelter. Seedlings provide low ground cover for small birds and mammals. Upon reaching pole size, trees provide good windbreaks and hiding cover for larger mammals such as elk and deer. Mature trees and standing snags house arboreal species, while fallen logs and stumps provide many cavity-dwelling species with shelter.

Other Uses and Values

Because old-growth ponderosa pine produces clear, high-grade lumber, this tree is reported to be the most important pine for timber production in the western United States. A large percentage of small, low-grade trees are processed into dimensional lumber and other products for the construction market. High-grade lumber is an important raw material for molding, millwork, cabinets, doors, and windows. It can also be used for windbreaks, buffer strips, highways, reclamation, and in landscapes as a mass planting.

Native Americans used the inner bark for emergency flour and boiled the young cones for emergency food. They scraped the bark and ate it raw as a sweet treat. They also converted the resin into medicinal salve to treat rheumatism, backaches, and dandruff.

No regular periodicity has been observed in the seed production of ponderosa pine over its entire range. Throughout ponderosa pine's range, except in the Black Hills and the west side of the Sierra Nevada, natural regeneration is sporadic. Successful natural regeneration is thought to be the result of the chance combination of a heavy seed crop and favorable weather during the next growing season.

Ponderosa pine does not reproduce naturally by vegetative methods. It can be propagated by rooting and grafting.

Fires have had a profound effect on the distribution of ponderosa pine. Although the seedlings are readily killed by fire, larger trees possess thick bark, which offers effective protection from fire damage. Competing trees are much more susceptible to fire, allowing ponderosa pine to remain a dominant species in large areas of middle-elevation forests in the west.

Montana's state tree is typically found on warm, dry sites. Average annual temperatures in ponderosa pine's range are between 41° and 50°F (5° and 10°C), and summer precipitation is minimal. The tree grows best in medium- to coarse-textured soils. Ponderosa pine grows best in full sun and deep, moist, well-drained soil, but will adapt to a wide range of soil and growing conditions including alkalinity, dryness, low humidity, wind, and high elevation. It is highly drought tolerant once established.

Ponderosa pine ranges from the Fraser River Drainage of southern British Columbia south through the mountains of Washington, Oregon, and California to near San Diego. In the northeastern part of its range, it extends east of the Continental Divide in Montana and south to the Snake River Plain in Idaho. Ponderosa pine is found at elevations from sea level to 9,000 feet (2,743 m).