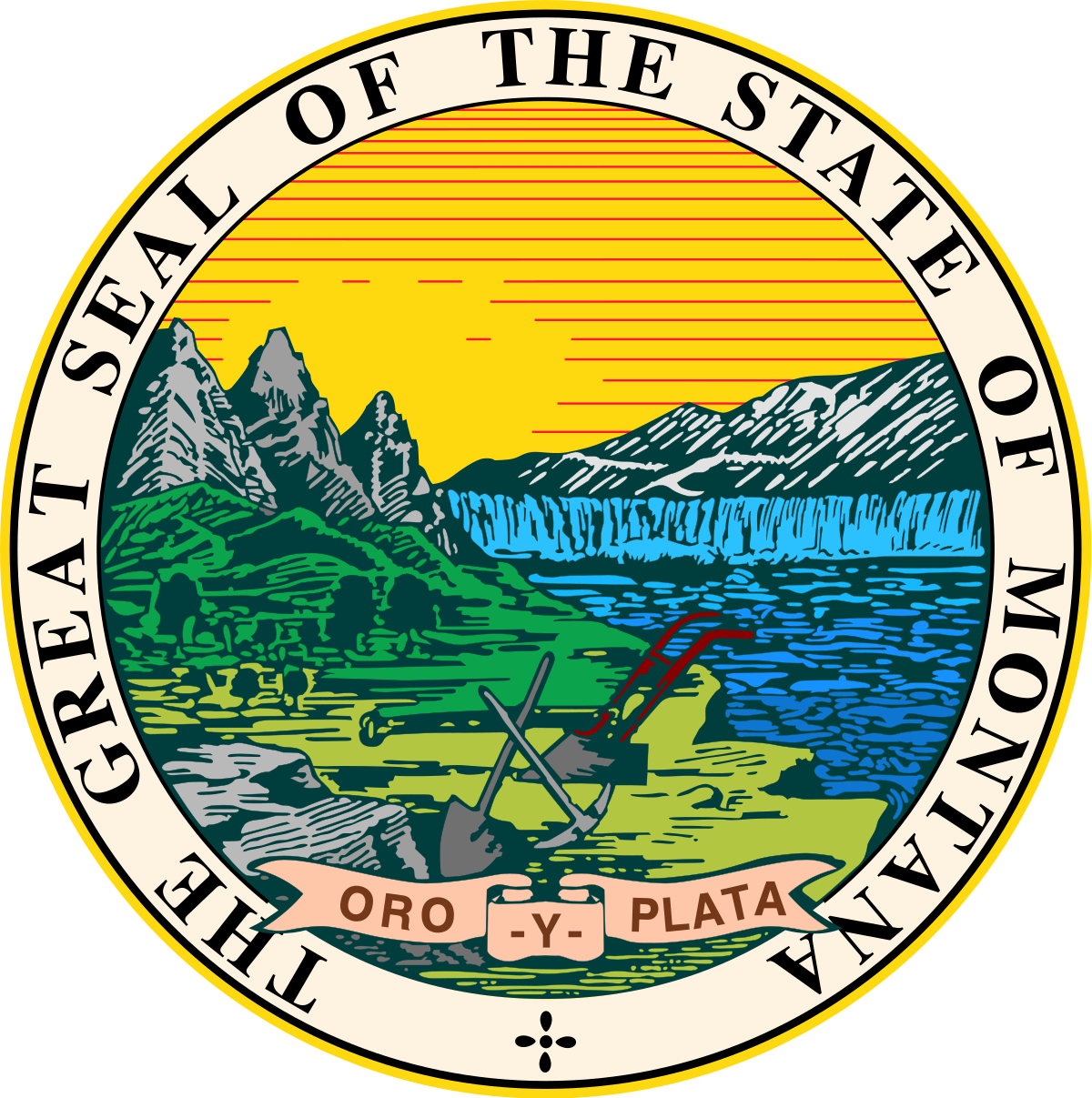 In 1891, shortly after Montana became a state, legislators began debating the design of the seal. The territorial seal was used until the third legislative assembly passed a resolution describing the state seal on March 2, 1893. By this time, proposals for adding Native Americans, settlers, miners, horses, sheep, cattle, and a train or stagecoach had been considered and rejected.

The legislators satisfied themselves with changing the word "Territory" to "State." Otherwise, they retained the design of the territorial seal. The execution was entrusted to G.R. Metten, manager of the J. Steimmetz Jewelry Company of Helena, who created a handsome seal with a few modifications to the scenery, most of which have been retained since.

Montana’s state code 1-1-501 lays out the design in basic terms:

The great seal of the state is as follows: a central group representing a plow and a miner's pick and shovel; upon the right, a representation of the Great Falls of the Missouri River; upon the left, mountain scenery; and underneath, the words "Oro y Plata." The seal must be 2 1/2 inches in diameter and surrounded by these words, "The Great Seal of the State of Montana."

The law does not mention a sun on the horizon, but a sun has appeared on the seal since territorial days. While some versions have shown the sun to be in the west, the modern seal depicts it in the east, indicating it is rising.

The plow and miner's pick and shovel illustrate the state's agricultural and mineral wealth. The mineral wealth is celebrated again in the words "Oro y Plata," gold and silver. The Great Falls and other scenery represent the state’s natural wonders. A rising sun indicates hope, and when used on state seals, is also taken to represent the new state.

The seal uses naturalistic colors for the scenery. Blue water, green grass and trees, and brown earth are almost universal on seal versions. Mountains variously appear as brown, blue, purple, or gray. The sky is often rendered in yellow or orange, like the sun. Sometimes it appears in blue with yellow rays.

The Great Seal of the State of Montana evolved from a basic design submitted by Francis McGee Thompson, a representative from Beaverhead County at the first territorial legislative assembly during the winter of 1864–65. The resolution accepting Thompson's design was passed on February 9, 1865, and signed the same day by Territorial Governor Sidney Edgerton.

Thompson's design contained the words "Oro el Plata," meant to be Spanish for gold and silver. This was later corrected to "Oro y Plata." Indeed, it is interesting to note that during the first territorial legislative deliberations on this subject, consideration was given to using the word "Eldorado" instead of "Oro y Plata." This proposal was voted down.

G.R. Metten, who executed the first state seal, was paid $20 for his work. House Bill 178, approved March 2, 1895, directed: "That the sum of twenty dollars be, and the same is hereby appropriated out of any moneys in the State Treasury not otherwise appropriated, for the relief of G.R. Metten for services rendered the State in the year 1893, drawing designs for the Great Seal of Montana."