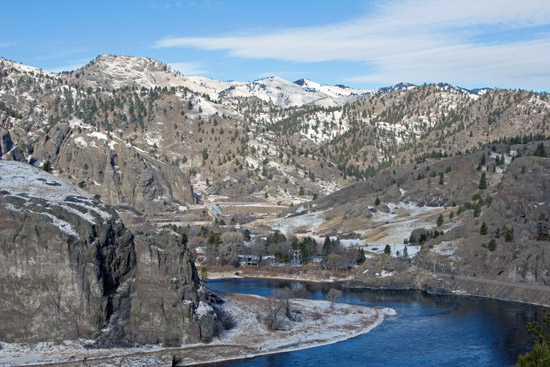 Limestone Formations at Gates of the Mountains Wilderness 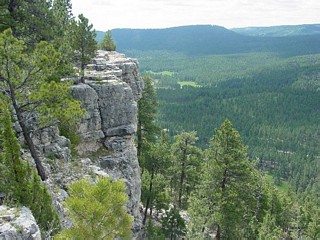 Limestone is a hard, fine-grained to very coarse-grained sedimentary rock composed primarily of calcium carbonate. Unlike sandstone or shale, which are clastic in origin (formed from particles of older rocks), limestone usually forms from the shells and skeletons of living creatures. These may be mollusks or other larger invertebrates, corals, or single-celled organisms. In general, limestone is more soluble than sandstone and thus more subject to weathering.

Reasons for the choice are both at the foundation of the state and in obvious view in many dramatic locations. A thick deposit of Madison limestone, 300 million years old, underlies most of Montana, coming to the surface in mighty outcroppings that form some of the state's most famous natural landmarks. The best known are Great Falls, Beaverhead Rock, and Glacier Peak.

Within this Madison limestone lies the Madison limestone aquifer, the largest artesian aquifer in the country and the source of Giant Springs, one of the world’s largest freshwater springs. Because of limestone’s susceptibility to erosion by underground water, caves and sinkholes are also an important part of Montana’s geology. The Lewis and Clark Caverns and the Monarch Sink are two impressive features in the Madison limestone.

Limestone is a sedimentary rock that forms by accretion (accumulation) of coarse to very fine particles of shell and sometimes from chemically dissolved calcium carbonate. The particles typically accrete in layers underwater, particularly in marine environments but also sometimes in freshwater.

As layers are buried under layers, pressure accumulates, compacting the particles. However, the temperatures and pressures to which limestone is subjected are much lower than those for igneous and metamorphic rocks. Marble is metamorphosed limestone, the result of increased pressure and heat that fuses the particles into a glossy stone.

Sedimentary rocks cover about 80 percent of the earth’s land and most of the ocean floor, yet they form a thin skin, accounting for only eight percent of the volume of the earth’s crust. Limestone specifically makes up about a quarter of this material. Because it lies at the surface, it is readily available all over the world.

Madison limestone was quarried in the Limestone Hills area for architectural facing work in the past, but the stone is mostly used now for cement production and other industrial purposes. Four Montana quarries currently produce about 2.5 million tons of crushed stone a year. Limestone in general is produced in many quarries in the U.S. Collectively, these quarries sold 581,000 metric tons of dimension (cut) limestone in the domestic market, of which 327,000 was dressed (precisely cut) and the rest was rough.

Dimension limestone is used in architecture because of its beauty, versatility, and prevalence. It lends itself well to ornamental carving. Limestone aggregate is used for industrial purposes such as roadbeds. Crushed limestone is one of the three main components of cement; it is heated with sand and clay until the components interact chemically to produce calcium silicate.

Limestone has been used for important buildings since ancient times. The Great Pyramid of Giza is made of limestone quarried near the construction site. The Western Wall of Jerusalem is one of the city’s many ancient structures made of local limestone. The famous medieval cathedral at Chartres, France, is made of limestone, as are the British Houses of Parliament and New York’s Empire State Building.

The famous Three Gorges of the Yangtze River (Qutang, Wu, and Xiling Gorges) are spectacular examples of natural limestone formations.