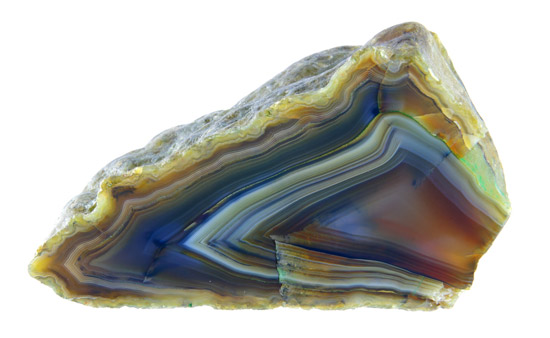 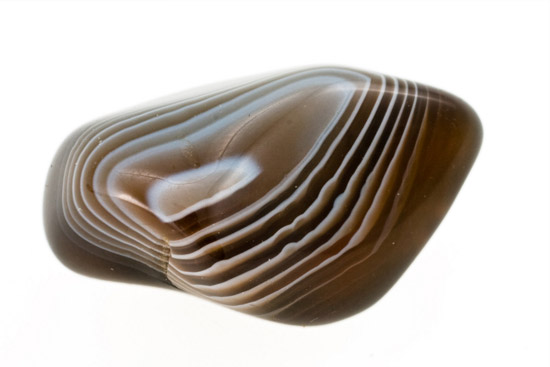 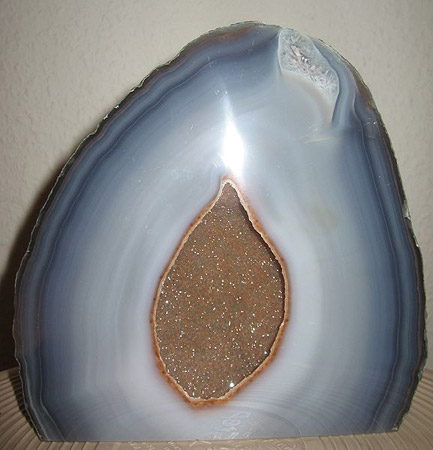 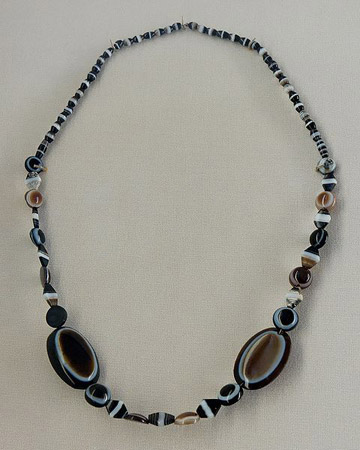 Agate is a layered, multicolored variety of chalcedony. Chalcedony is a catch-all term that includes gemstones with microscopic crystal structures composed of quartz, many also containing the mineral mogánite. When these gemstones are concentrically banded, they are called agates. Because agates occur in an infinite number of colors and patterns, no two are alike. Agate is composed of silicon and oxygen, with iron and aluminum oxides sometimes present.

Agate forms in rounded nodules or veins. Often, centuries of water have washed the outer surface away to reveal the pattern inside. When this is not the case, the crust must be cut open to view the stone’s inner beauty. Tiny quartz crystals called drusy often form inside the stone, especially in agates with hollow cavities. Since unpolished specimens of agate are dull, they are normally polished to bring out their full beauty.

Agate is one of Montana’s two official state gemstones; the other is the world-famous Yogo sapphire. Both were adopted as Montana’s official state geological symbols in 1969. While not technically a gemstone, agate represents the geology and economy of Montana well. It is found in the southern and eastern parts of the state and in the Yellowstone River and is popular with mineral collectors and tourists.

Agate is also an official stone of Tennessee and the state gemstone of Louisiana.

The name of this mineral comes from the site where it was originally reported, the Achates River, or Αχάτης in Greek, which is now known as the Dirillo River in Sicily, Italy. The Greek naturalist and philosopher Theophrastus discovered agates sometime between the 4th and 3rd centuries BCE. Agates were widely used in the ancient world.

Agates are normally associated with volcanic lava rocks and are also found in some metamorphic rocks. Silica-rich water percolates through the rock, escaping as gas and depositing traces of the silica in the rock’s crevices. Layers are formed and eventually the rounded nodules called agates result.

Agates are widespread, occurring in most areas of the world. In addition to the site where the mineral was first reported in Sicily, major agate locations include Argentina, Botswana, Brazil, Germany, Mexico, Morocco, Poland, the U.S., and other regions of Italy. The important gem region of Idar-Oberstein, in the Hunsrück Mountains in Rheinland-Pfalz, Germany, got its start as a source for agate thousands of years ago.

Because of its abundance, durability, and beauty, chalcedony was one of the earliest raw materials used by humans. The earliest recorded use was for projectile points, knives, tools, and containers such as cups and bowls. Early humans made weapons and tools from many varieties of chalcedony including agate, agatized coral, jasper, and petrified wood. Agate, along with petrified wood, was then elevated from functional use as tools, vessels, and weapons to gem status, being used for decorative and religious purposes.

From antiquity through the Renaissance period, collecting bowls made of agate was a popular hobby, especially among royalty. In fact, this hobby is what led to the growth of the gemstone industry in the Idar-Oberstein district of Germany, one of the world’s leading centers for gemstone cutting and trading. The town is still known for some of the world’s finest agate carving.

Because the material is suitable for cutting and takes a good polish, agate is chiefly made into stones and used for ornamental purposes, such as in brooches and pins, pendants and charms, beads, mosaics, and dream catchers. Agate is one of the most varied and most popular gemstones. It also has industrial applications, including letter openers, inkstands, mortars, and pestles.

Agate has been believed for centuries to protect the wearer or holder of the stone from a wide variety of dangers and to bring good fortune. Because it has been known and used by humans for millennia, the supposed benefits of agate are innumerable and cross into many cultures.

Agate is the mystical birthstone for September and the birthstone for the zodiac sign of Gemini. Agate is given for the 12th and 14th wedding anniversaries.

Some data courtesy of the Mineralogical Society of America