Nonrenewable energy sources come out of the ground as liquids, gases, and solids. Crude oil (petroleum) is the only commercial nonrenewable fuel that is naturally in liquid form. Natural gas and propane are normally gases, and coal is a solid. Of the four categories of nonrenewable source listed below, only the first three are fossil fuels. Uranium ore, a solid, is mined and converted to a fuel used at nuclear power plants. Uranium is not a fossil fuel, but is a nonrenewable fuel.

The first image is about the Ocean 300 to 400 million years ago. Tiny sea plants and animals died and were buried on the ocean floor. Over time, they were covered by layers of sand and silt.

The second image is about the Ocean 50 to 100 million years ago. Over millions of years, the remains were buried deeper and deeper. The enormous heat and pressure turned them into oil and gas.

The third image is about Oil & Gas Deposits. Today, we drill down through layers of sand, silt, and rock to reach the rock formations that contain oil and gas deposits.">

A 42-U.S. gallon barrel of crude oil yields between 44 and 45 gallons of petroleum products.

Refineries in the United States produce about 19 gallons of gasoline from every 42-gallon barrel of crude oil that is refined.

Edwin Drake dug the first U.S. oil well in 1859 and distilled the petroleum to produce kerosene for lighting. Drake had no use for the gasoline or other products, so he discarded them. It wasn't until 1892 with the invention of the automobile that gasoline was recognized as a valuable fuel. By 1920, there were 9 million vehicles on the road powered by gasoline, and service stations were popping up everywhere.

249 Million Vehicles on the Road

Today, gasoline is the fuel used by most passenger vehicles in the United States. There are about 249 million vehicles that use gasoline, and they each travel over 12,000 miles per year. There are about 162,000 fueling stations that provide convenient refueling for consumers. Nearly two-thirds of fuel used for transportation is in the form of gasoline.

The U.S. Uses More than it Makes

Gasoline Use Contributes to Air and Water Pollution

Gasoline is a highly flammable and toxic liquid. The vapors given off when it evaporates and the substances produced when it is burned (carbon monoxide, nitrogen oxides, particulate matter, and unburned hydrocarbons) contribute to air pollution.

Laws Such as the Clean Air Act Reduce Environmental Impact

The Clean Air Act is the major law aimed at reducing air pollution. The Clean Air Act (first passed in 1970) and its amendments have aimed to reduce pollution from driving by requiring both cleaner cars and cleaner fuels (gasoline and diesel). The Environmental Protection Agency (EPA) put these goals into action by requiring the following:

Gasoline Changes with the Seasons

The main difference between winter- and summer-grade gasoline is its vapor pressure. Gasoline evaporates more easily in warm weather, releasing more volatile organic compounds that contribute to health problems and the formation of ground-level ozone and smog. In order to cut down on pollution, the Environmental Protection Agency requires petroleum refiners to reduce the vapor pressure of gasoline used during the summer months. During cold winter months, vapor pressure must be high enough for the engine to start easily.

Diesel fuel is used in the diesel engines found in most freight trucks, trains, buses, boats, and farm and construction vehicles. Diesel fuel powers the vehicles that we use to produce and transport nearly all of our food and all of the other products we make and buy. Some cars and small trucks and boats also have diesel engines.

Approximately 11 gallons of distillate are produced from each 42-gallon barrel of crude oil. Of these 11 gallons of distillate, less than 2 gallons are heating oil, and the other 9 are diesel fuel. Because diesel fuel requires additional processing to remove sulfur, it is more costly to produce than heating oil. Heating oil is used by many Americans, especially in the Northeast, to heat their homes.

Propane naturally occurs as a gas. However, at higher pressure or lower temperatures, it becomes a liquid. Because propane is 270 times more compact as a liquid than as a gas, it is transported and stored in its liquid state. Propane becomes a gas again when a valve is opened to release it from its pressurized container. When returned to normal pressure, propane becomes a gas so that we can use it.

How Is Propane Used?

Although propane accounts for less than 2% of all energy used in the United States, it has some very important uses. Propane is the most common source of energy in rural areas that do not have natural gas service.

In homes, propane is used for:

On farms, propane is used to dry corn and power farm equipment and irrigation pumps. Businesses and industry use propane to run their fork lifts and other equipment.

While only a small fraction of propane is used for transportation, it is the second largest alternative transportation fuel in use today. Instead of gasoline, propane often fuels fleets of vehicles used by school districts, government agencies, and taxicab companies. In recreational pursuits, hot air balloons use propane to heat the air that makes them rise.

About 45% of propane is used by the chemical industry as a raw material for making plastics, nylon, and other materials. 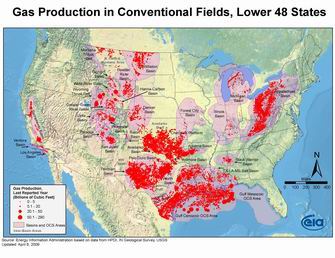 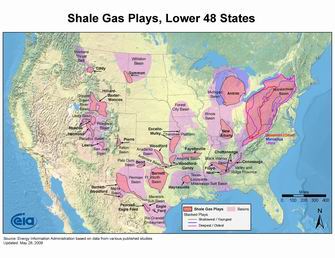 How Natural Gas Is Used

Natural gas is used to produce steel, glass, paper, clothing, brick, electricity and as an essential raw material for many common products. Some products that use natural gas as a raw material are: paints, fertilizer, plastics, antifreeze, dyes, photographic film, medicines, and explosives.

Slightly more than half of the homes in the United States use natural gas as their main heating fuel. Natural gas is also used in homes to fuel stoves, water heaters, clothes dryers, and other household appliances.

The major consumers of natural gas in the United States in 2008 included:

Where Natural Gas Is Used

Natural gas is used throughout the United States, but the top natural gas consuming States in 2007 were:

Coal is a combustible black or brownish-black sedimentary rock composed mostly of carbon and hydrocarbons. It is the most abundant fossil fuel produced in the United States.

For millions of years, a layer of dead plants at the bottom of the swamps was covered by layers of water and dirt, trapping the energy of the dead plants. The heat and pressure from the top layers helped the plant remains turn into what we today call coal.

The first image is of a swamp, 300 million years ago. Before the dinosaurs, many giant plants died in swamps.

The second image is of water, 100 million years ago. Over millions of years, these plants were buried under water and dirt.

The third image is of rocks and dirt over the coal. Heat and pressure turned the dead plants into coal.">

Coal is classified into four main types, or ranks (anthracite, bituminous, subbituminous, and lignite), depending on the amounts and types of carbon it contains and on the amount of heat energy it can produce. The rank of a deposit of coal depends on the pressure and heat acting on the plant debris as it sank deeper and deeper over millions of years. For the most part, the higher ranks of coal contain more heat-producing energy.

Anthracite contains 86-97% carbon, and generally has a heating value slightly higher than bituminous coal. It accounts for less than 0.5% of the coal mined in the United States.

All of the anthracite mines in the United States are located in northeastern Pennsylvania.

West Virginia, Kentucky, and Pennsylvania are the largest producers of bituminous coal.

Wyoming is the leading source of subbituminous coal.

Lignite is the lowest rank of coal with the lowest energy content. Lignite coal deposits tend to be relatively young coal deposits that were not subjected to extreme heat or pressure, containing 25%-35% carbon. Lignite is crumbly and has high moisture content. There are 19 lignite mines in the United States, producing about 7% of U.S. coal.

Most lignite is mined in Texas and North Dakota. Lignite is mainly burned at power plants to generate electricity.

During nuclear fission, a small particle called a neutron hits the uranium atom and splits it, releasing a great amount of energy as heat and radiation. More neutrons are also released. These neutrons go on to bombard other uranium atoms, and the process repeats itself over and over again. This is called a chain reaction. The heat given off during fission in the reactor is used to boil water into steam, which turns turbine blades. As they turn, they drive generators that make electricity.

Drawing of How Fission Splits the Uranium Atom

Nuclear energy is energy in the nucleus (core) of an atom. Atoms are tiny particles that make up every object in the universe. There is enormous energy in the bonds that hold atoms together.

The fuel most widely used by nuclear plants for nuclear fission is a certain kind of uranium, referred to as U-235. This kind of uranium is used as fuel because its atoms are easily split apart. Though uranium is quite common, about 100 times more common than silver, U-235 is relatively rare.

The spent fuel is highly radioactive. Like all radioactive materials, it is hazardous. Since a power plant will generate about 20 metric tons of spent fuel each year, finding ways to isolate this waste so that it does no harm is a critical consideration.

Some canisters are designed to be placed vertically in robust above-ground concrete or steel structures.

Some canisters are designed to be stored horizontally in above-ground concrete bunkers, each of which is about the size of a one-car garage.

The United States Has the Most Nuclear Capacity

In 2007, the United States had more nuclear capacity than any other nation, 100.3 gigawatts, followed in rank order by France, Japan, and Germany. Although each of these countries generates less electricity than the United States, they are more dependent on nuclear power.