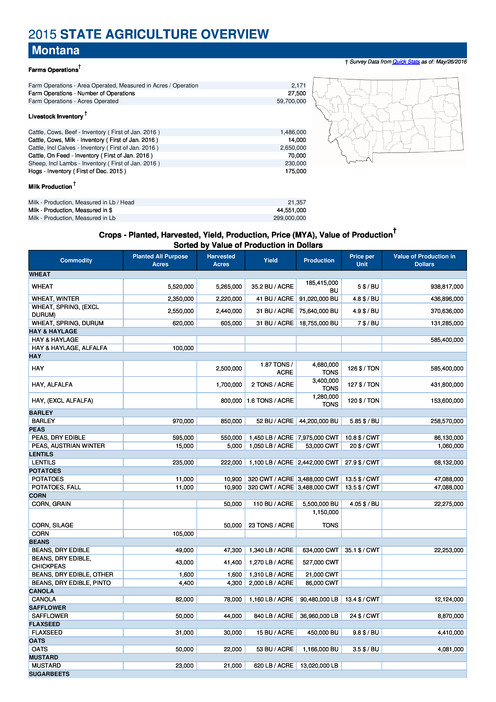 This yearly state agriculture report offers the most recent data on 32 kinds of crops, from alfalfa to winter wheat. It indicates acreage planted, acreage harvested, yield, production, and, where available, price per unit and total crop dollar value. The methods of collecting the data are not as exacting as those used for the census (see below), but they have advantages for researchers who need the most up-to-date information.

For over two centuries, the U.S. government has recognized and responded to the importance of keeping accurate agricultural information. The nation's first agricultural survey was conducted by President George Washington. In 1791, Washington personally conducted a mail survey of farms in present-day Pennsylvania, West Virginia, Maryland, Virginia, and the District of Columbia to collect agricultural statistics on land values, crops, yields, livestock prices, and taxes. Washington sent the details of his survey to an English correspondent, Arthur Young.

Use of Agricultural Surveys

Washington's legacy of surveying and reporting on the state of agriculture in our country continued during the Civil War, when the U.S. Department of Agriculture collected and distributed crop and livestock statistics to help farmers assess the value of the goods they produced. At that time, commodity buyers usually had more current and detailed market information than did farmers. This circumstance often prevented farmers from getting a fair price for the goods they produced on their farms. Producers in today's marketplace would be similarly handicapped were it not for the information provided by the USDA?s National Agricultural Statistics Service (NASS).

Census of Agriculture for Montana (every five years)

The report at right summarizes the latest census data, compiled in 2012. The survey is conducted every five years by the National Agricultural Statistics Service (NASS), which is part of the U.S. Department of Agriculture. The NASS collects statistics at the national, state/territory, and county levels, making an effort to count every U.S. farm. For purposes of the census, any place that produced and sold $1,000 or more of agricultural products during the census year was considered a farm.

The first page of this summary answers the questions:

The tables on the second page go into more detail. They show:

Uses of the Agricultural Census

Among those who use the data are farm organizations; businesses; state departments of agriculture; elected representatives and legislative bodies at all levels of government; public and private sector analysts; the news media; and colleges and universities. With accurate agricultural statistics, public and private entities concerned with agriculture can create better conditions to support the productivity and success of the country's farming operations.